You are viewing an old version of this page. View the current version.

NEW REPORT: User Badge Overview Report - To help with the tracking and reporting of badges issued through Moodle and Totara LMS, the Zoola team has built a new Badge Data Source, which combines badge, user and course information into a single data source. In addition to this, the Zoola team have built an User Badge Overview Ad Hoc View and Report, which can be used to see basic badge information within the LMS. You can access these new Zoola artifacts by visiting View Existing under the Data Sources, Ad Hoc Views or Reports menu items.

COMPATIBILITY: Totara 12 - Zoola has been updated and tested with Totara 12

ENHANCEMENT: Add Course Completion filters to Event Scheduler - Over the last few releases we have been making enhancements to the Zoola Reports block Event Scheduler, which allows for reports or messages to be sent by Zoola when particular events take place within the LMS. We have now further enhanced this functionality to allow for specific event filters to be applied to the Course Completion event. This allows for greater control over the reports and messages that should be sent when specific courses have been completed. 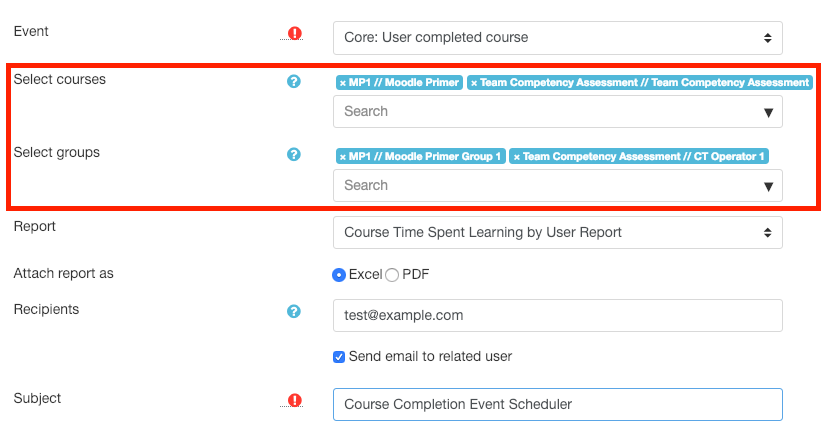 Schedules created with these settings applied will now only send reports or messages to the users associated with specific courses or groups, as they appear in the course completion event. For more information on the Event Scheduler and its usage, please visit the Case Study: Using the Zoola Reports Block Event Scheduler walkthrough for a more in depth explanation.

For Block Schedules (available by clicking Scheduled Reports in the Zoola Reports Block) or Event Schedules the exports are based on the user's preferred language selection only.

BUG: Modal Issue with Time Tracker plugin when using the Moodle RemUI Theme - We have identified an issue when using the Lambda Time Tracker (local_lambda_time_tracker) with the Edwiser RemUI theme for Moodle where if a Time Tracker interrupt is triggered (user does not interact with LMS for longer than specified time) the LMS screen becomes unresponsive. Lambda have identified the fix for this this and informed Edwiser, the RemUI theme developers, to incorporate into a future version of the theme. To manually fix this issue you can add the following CSS rule to the RemUI theme, Custom CSS area (Site Administration > Appearance > Themes > Edwiser RemUI > General Settings > Custom CSS).